We gave a "Best Practices" conference talk at AssertJS (February 2018). This video demonstrates how to approach breaking down your application and organizing your tests.

After adding a new project, Cypress will automatically scaffold out a suggested folder structure. By default it will create:

While Cypress allows you to configure where your tests, fixtures, and support files are located, if you're starting your first project, we recommend you use the above structure.

info
What files should I add to my '.gitignore file' ?

Cypress will create a screenshotsFolder and a videosFolder to store the screenshots and videos taken during the testing of your application. Many users will opt to add these folders to their .gitignore file. Additionally, if you are storing sensitive environment variables in your Cypress configuration or cypress.env.json, these should also be ignored when you check into source control.

Test files are located in cypress/e2e by default, but can be configured to another directory. Test files may be written as:

Cypress also supports ES2015 out of the box. You can use either ES2015 modules or CommonJS modules. This means you can import or require both npm packages and local relative modules.

Check out our recipe using ES2015 and CommonJS modules.

To see an example of every command used in Cypress, open the 2-advanced-examples folder within your cypress/e2e folder.

Fixtures are used as external pieces of static data that can be used by your tests. Fixture files are located in cypress/fixtures by default, but can be configured to another directory.

You would typically use them with the cy.fixture() command and most often when you're stubbing Network Requests.

There are some folders that may be generated after a test run, containing assets that were generated during the test run.

You may consider adding these folders to your .gitignore file to ignore checking these files into source control.

Any files downloaded while testing an application's file download feature will be stored in the downloadsFolder which is set to cypress/downloads by default.

Any videos recorded of the run are stored in the videosFolder which is set to cypress/videos by default.

Generated screenshots and videos are saved inside their respective folders (cypress/screenshots, cypress/videos). The paths of the generated files will be stripped of any common ancestor paths shared between all spec files found by the specPattern option (or via the --spec command line option or spec module API option, if specified) 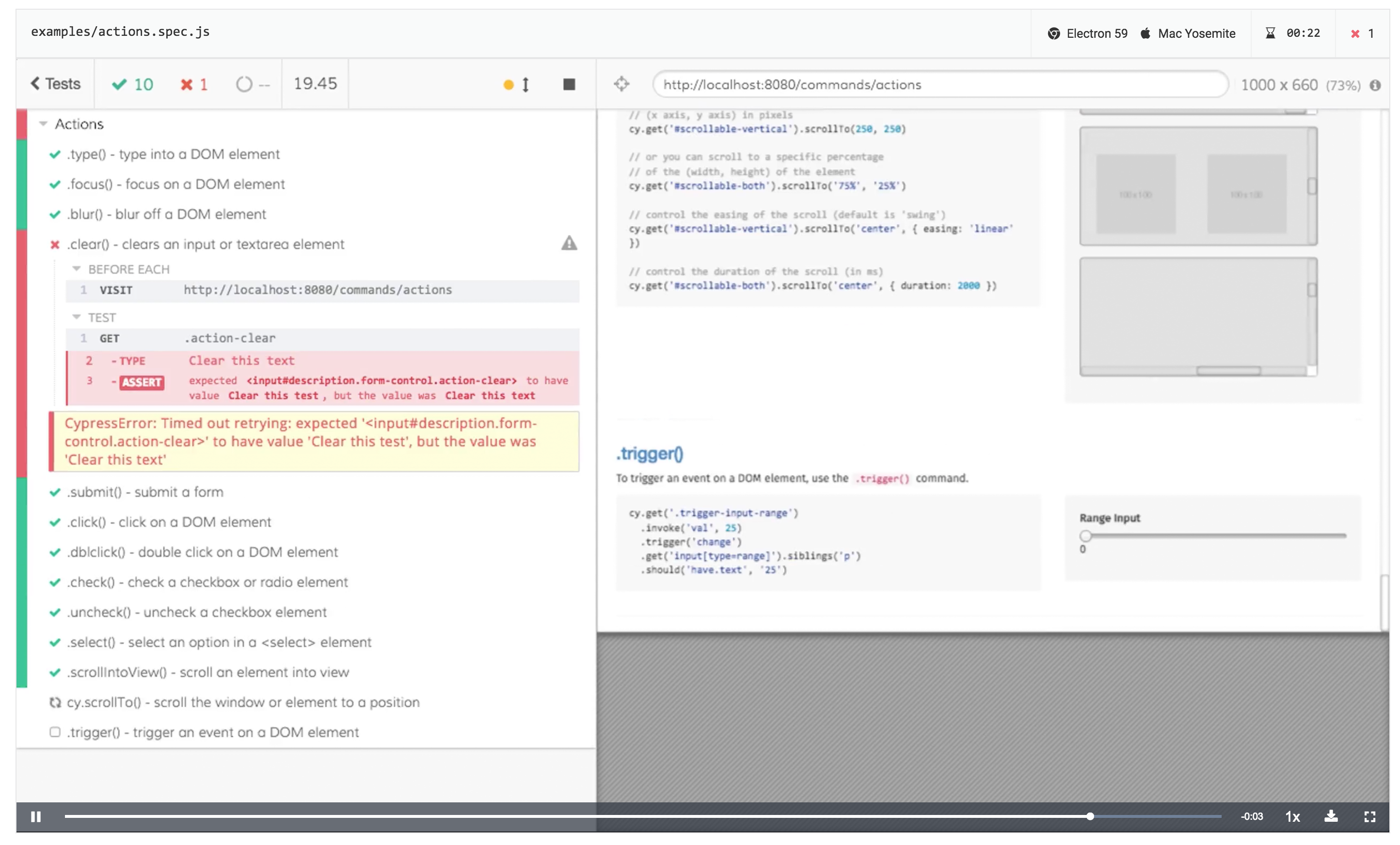 Instead of administering assets yourself, you can save them to the cloud with Cypress Cloud. Screenshots and videos are stored permanently, attached to their respective test results, and easily shared or browsed through our web interface.

To learn more about videos and settings available, see Screenshots and Videos

Configuring plugins via cypress/plugins/index.js is no longer supported as of Cypress version 10.0.0.

The plugins file is a special file that executes in Node before the project is loaded, before the browser launches, and during your test execution. While the Cypress tests execute in the browser, the plugins file runs in the background Node process, giving your tests the ability to access the file system and the rest of the operating system by calling the cy.task() command.

The plugins file is a good place to define how you want to bundle the spec files via the preprocessors, how to find and launch the browsers via the browser launch API, and other cool things. Read our plugins guide for more details and examples.

The initial imported plugins file can be configured to another file.

To include code before your test files, set the supportFile path. By default, supportFile is set to look for one of the following files:

For a given testing type, multiple matching supportFile files will result in an error when Cypress loads.

Depending on which testing type you are using, you can configure your supportFile accordingly.

Cypress automatically creates an example support file for each configured testing type, which has several commented out examples.

This file runs before every single spec file. We do this purely as a convenience mechanism so you don't have to import this file.

The support file is a great place to put reusable behavior such as custom commands or global overrides that you want applied and available to all of your spec files.

The initial imported support file can be configured to another file or turned off completely using the supportFile configuration. From your support file you can import or require other files to keep things organized.

You can define behaviors in a before or beforeEach within any of the cypress/support files:

Note: This example assumes you are already familiar with Mocha hooks.

If Cypress does not find the spec files for some reason, you can troubleshoot its logic by opening or running Cypress with debug logs enabled:

Cypress is built on top of Mocha and Chai. We support both Chai's BDD and TDD assertion styles. Tests you write in Cypress will mostly adhere to this style.

To start writing tests for your app, follow our guides for writing your first Component or End-to-End test.

Needing a low code approach to create tests? Use Cypress Studio to record your browser interactions.

The test interface, borrowed from Mocha, provides describe(), context(), it() and specify().

The order of hook and test execution is as follows:​

Excluding and Including Tests​

To run a specified suite or test, append .only to the function. All nested suites will also be executed. This gives us the ability to run one test at a time and is the recommended way to write a test suite.

To skip a specified suite or test, append .skip() to the function. All nested suites will also be skipped.

Best Practice: Tests should always be able to be run independently from one another and still pass.

As stated in our mission, we hold ourselves accountable to champion a testing process that actually works, and have built Cypress to guide developers towards writing independent tests from the start.

We do this by cleaning up test state and the browser context before each test to ensure that the operation of one test does not affect another test later on. The goal for each test should be to reliably pass whether run in isolation or consecutively with other tests. Having tests that depend on the state of an earlier test can potentially cause nondeterministic test failures which makes debugging challenging.

The behavior of running tests in a clean browser context is described as testIsolation.

The test isolation is a global configuration and can be overridden for end-to-end testing at the describe level with the testIsolation option.

To learn more about this behavior and the trade-offs of disabling it, review our Test Isolation guide.

It is possible to apply test configuration values to a suite or test. Pass a configuration object to the test or suite function as the second argument.

If you want to target a suite of tests to run or be excluded when run in a specific browser, you can override the browser configuration within the suite configuration. The browser option accepts the same arguments as Cypress.isBrowser().

The following suite of tests will be skipped if running tests in Chrome browsers.

The following suite of tests will only execute when running in the Firefox browser. It will overwrite the viewport resolution in one of the tests, and will merge any current environment variables with the provided ones.

You can configure the number of retry attempts during cypress run or cypress open. See Test Retries for more information.

The code above will produce a suite with 4 tests:

The .should() command and its alias .and() can also be used to more easily chain assertions off of Cypress commands. Read more about assertions.

You can run a test by clicking on the spec filename. For example the Cypress RealWorld App has multiple test files, but below we run the "new-transaction.spec.ts" test file by clicking on it.

After the Cypress spec completes every test has one of 4 statuses: passed, failed, pending, or skipped.

Passed tests have successfully completed all their commands without failing any assertions. The test screenshot below shows a passed test:

Note that a test can pass after several test retries. In that case the Command Log shows some failed attempts, but ultimately the entire test finishes successfully.

Good news - the failed test has found a problem. Could be much worse - it could be a user hitting this bug!

After a test fails, the screenshots and videos can help find the problem so it can be fixed.

You can write placeholder tests in several ways as shown below, and Cypress knows NOT to run them. Cypress marks all the tests below as pending.

All 3 tests above are marked pending when Cypress finishes running the spec file.

So remember - if you (the test writer) knowingly skip a test using one of the above three ways, Cypress counts it as a pending test.

The last test status is for tests that you meant to run, but these tests were skipped due to some run-time error. For example, imagine a group of tests sharing the same beforeEach hook - where you visit the page in the beforeEach hook.

If the beforeEach hook completes and both tests finish, two tests are passing.

But what happens if a command inside the beforeEach hook fails? For example, let's pretend we want to visit a non-existent page /does-not-exist instead of the /. If we change our beforeEach to fail:

If we collapse the test commands, we can see the empty box marking the skipped test "adds 2 todos".

The tests that were meant to be executed but were skipped due to some run-time problem are marked "skipped" by Cypress.

Tip: read the blog post Cypress Test Statuses for more examples explaining the reasoning behind these test statuses. Read the blog post Writing Test Progress to learn how to use the pending tests to tracking the test strategy implementation.

When running in using cypress open, Cypress watches the filesystem for changes to your spec files. Soon after adding or updating a test Cypress will reload it and run all of the tests in that spec file.

This makes for a productive development experience because you can add and edit tests as you're implementing a feature and the Cypress user interface will always reflect the results of your latest edits.

Remember to use .only to limit which tests are run: this can be especially useful when you've got a lot of tests in a single spec file that you're constantly editing; consider also splitting your tests into smaller files each dealing with logically related behavior.

The folder, the files within the folder, and all child folders and their files (recursively) are watched.

Those folder paths refer to the default folder paths. If you've configured Cypress to use different folder paths then the folders specific to your configuration will be watched.

Everything else; this includes, but isn't limited to, the following:

Nothing is watched during cypress run.

The watchForFileChanges property is only in effect when running Cypress using cypress open.

The component responsible for the file-watching behavior in Cypress is the webpack-preprocessor. This is the default file-watcher packaged with Cypress.

If you need further control of the file-watching behavior you can configure this preprocessor explicitly: it exposes options that allow you to configure behavior such as what is watched and the delay before emitting an "update" event after a change.

Cypress also ships other file-watching preprocessors; you'll have to configure these explicitly if you want to use them.