A core feature of Cypress that assists with testing dynamic web applications is retry-ability. Like a good transmission in a car, it usually works without you noticing it. But understanding how it works will help you write faster tests with fewer run-time surprises.

If you are looking to retry tests a configured number of times when the test fails, check out our guide on Test Retries.

While all methods you chain off of cy in your Cypress tests are commands, there are some different types of commands it's important to understand: queries, assertions and actions have special rules about retryability. For example, there are 4 queries, an action, and 2 assertions in the test below.

The Command Log shows all commands regardless of types, with passing assertions showing in green. 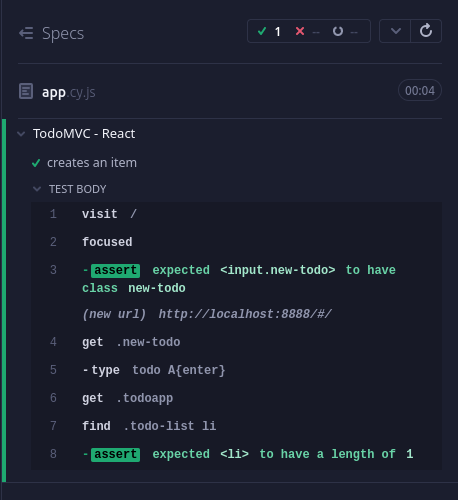 Let's look at the last chain of commands:

Because nothing is synchronous in modern web applications, Cypress can't query all the DOM elements matching .todo-list li and check if there is exactly one of them. There are many examples of why this would not work well.

Thus cy.get and cy.find() have to be smarter and expect the application to potentially update. cy.get() queries the application's DOM, finds the elements that match the selector, and then passes them to .find('.todo-list li'). .find() locates a new set of elements, and tries the assertion that follows (in our case should('have.length', 1)) against the list of found elements.

Retry-ability allows the test to complete each query as soon as the assertion passes, without hard-coding waits. If your application takes a few milliseconds or even seconds to render each DOM element - no big deal, the test does not have to change at all. For example, let's introduce an artificial delay of 3 seconds when refreshing the application's UI below in an example TodoMVC model code:

The test still passes! cy.get('.todo-list') passes immediately - the todo-list exists - but .find('.todo-list li').should('have.length', 1) show the spinning indicators, meaning Cypress is requerying for them.

Within a few milliseconds after the DOM updates, cy.find() finds an element and the should('have.length', 1) assertion passes

Queries and assertions are always executed in order, and always retry 'from the top'. If you have multiple assertions, Cypress will retry until each passes before moving on to the next one.

Often a Cypress command has built-in assertions that will cause the previous queries to be retried. For example, the .eq() query will be retried even without any attached assertions until it finds an element with the given index.

Only queries can be retried, but most other commands still have built-in waiting. For example, as described in the "Assertions" section of .click(), the click() action command waits to click until the element becomes actionable, including re-running the query chain leading up to it in case the page updates while we're waiting.

Cypress tries to act like a human user would using the browser.

By default each command that retries does so for up to 4 seconds - the defaultCommandTimeout setting.

You can change the default timeout for all commands. See Configuration: Overriding Options for examples of overriding this option.

For example, to set the default command timeout to 10 seconds via the command line:

We do not recommend changing the command timeout globally. Instead, pass the individual command's { timeout: ms } option to retry for a different period of time. For example:

Cypress will retry for up to 10 seconds to find a visible element with data-testid attribute mobile-nav with text containing "Home". For more examples, read the Timeouts section in the "Introduction to Cypress" guide.

Overriding the timeout to 0 will essentially disable retrying the query or waiting on an other, since it will spend 0 milliseconds retrying.

Only queries are retried​

Any command that isn't a query, such as .click(), follows different rules than queries do. Cypress will retry any queries leading up to a command, and retry any assertions after a command, but commands themselves never retry - nor does anything leading up to them after they've resolved.

Most commands are not retried because they could potentially change the state of the application under test. For example, Cypress will not retry the .click() action command, because it could change something in the application. After the click occurs, Cypress will also not re-run any queries before .click().

Actions should be at the end of chains, not the middle​

Correctly ending chains after an action​

To avoid these issues entirely, it is better to split up the above chain of commands.

Writing your tests in this way will help you avoid issues where the page rerenders in the middle of your test and Cypress loses track of which elements it's supposed to be operating or asserting on. Aliases - cy.as() - can help make this pattern less intrusive.

Very rarely you may want to retry a command like .click(). We describe one case like that where the event listeners are attached to a modal popup only after a delay, thus causing default events fired during .click() to not register. In this special case you may want to "keep clicking" until the event registers, and the dialog disappears. Read about it in the When Can the Test Click? blog post.

Because of the assertions built into every command, and action commands in particular, you should rarely need this pattern.

As another example, when confirming that the button component invokes the click prop testing with the cypress/react mounting library, the following test might or might not work:

Incorrectly checking if the stub was called​

The above example will fail if the component calls the click prop after a delay. 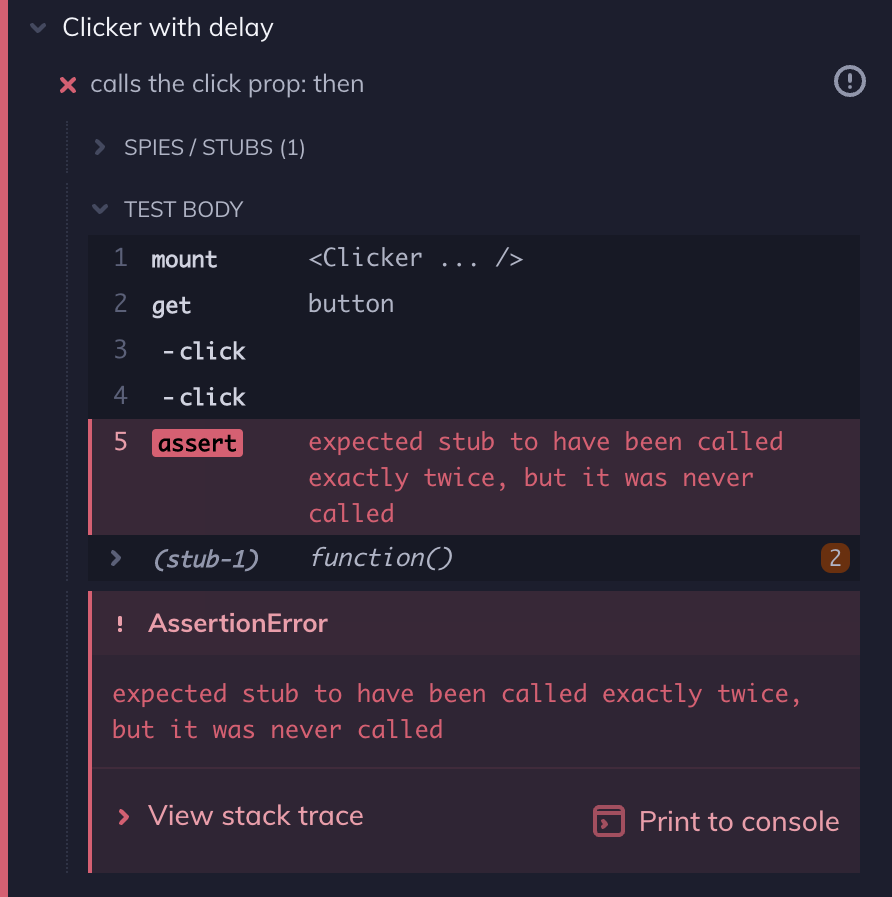 The test finishes before the component calls the click prop twice, and without retrying the assertion expect(onClick).to.be.calledTwice.

It could also fail if React decides to rerender the DOM between clicks.

Correctly waiting for the stub to be called​

We recommend aliasing the stub using the .as command and using cy.get('@alias').should(...) assertions.

Use .should() with a callback​

If you are using commands, but need to retry the entire chain, consider rewriting the commands into a .should(callbackFn).

Below is an example where the number value is set after a delay:

You may want to write a test like below, to test that the number is between 1 and 10, although this will not work as intended. The test yields the following values, noted in the comments, before failing.

Unfortunately, the .then() command is not retried. Thus the test only runs the entire chain once before failing. 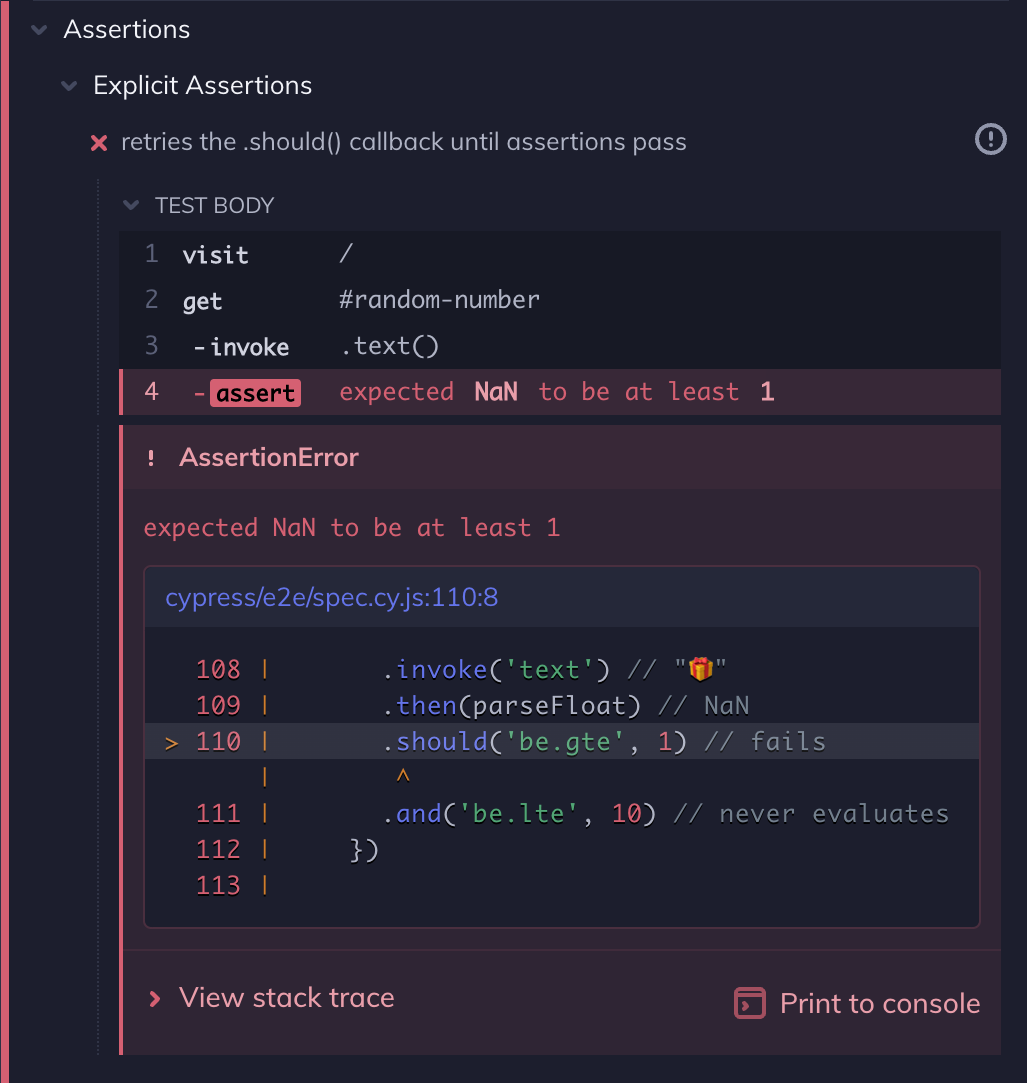 We need to retry getting the element, invoking the text() method, calling the parseFloat function and running the gte and lte assertions. We can achieve this using the .should(callbackFn).

The above test retries getting the element and invoking the text of the element to get the number. When the number is finally set in the application, then the gte and lte assertions pass and the test passes.